The US Mint only currently produces two series of coins available to investors. The first is the American Buffalo coin, which is only available in gold. The second is the American Eagle series. This is the most prominent and well know coin series. It is currently available in gold, silver and platinum. In 2017 it was also launched in palladium, but this was discontinued. The US Mint is responsible for making all of the US coinage in addition to its precious metals coins. Two versions of bullion coins are released by the mint annually - proof coins, which are designed for collectors and sell at quite a high premium, and bullion coins, which are designed for investors.

About the Platinum Eagle Series

The Platinum American Eagle coin series was first launched in 1997, following on from the sucess of the gold and silver American Eagles, which were launched in 1986. The coin features the same design each year. The front of each coin features an image of the face of the Statue of Liberty, with the word 'Liberty' written above her tiara. To the right of her face, the words 'In God We Trust' are inscribed, along with the coin's year of minting. The reverse of each coin features an image of a Bald Eagle (America's national bird) flying, with the sun rising behind him. The words 'United States of America' are written on the top, with the coin's purity, platinum, and the coin's size to the right of the Eagle. At the bottom of the coin is its face value. 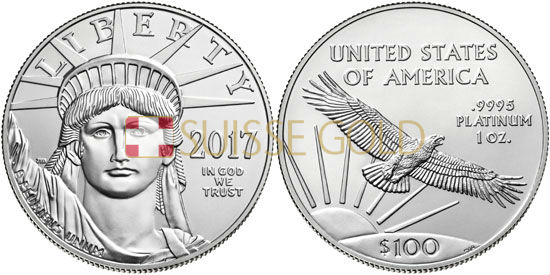 The design of the platinum American Eagle bullion coin is the same each year. However, proof platinum Eagles come in new and different designs each year. 2020's proof American Eagle coin features an image honouring the preamble to the constitution, which celebrates life, liberty and the pursuit of happiness as the core values which the constitution is designed to protect.

Platinum American Eagle coins were offered in four sizes from 1997 till 2008. Platinum Eagles were not manufactured from 2009 until 2013, when they were reintroduced, but only as a 1 ounce sized coin. All platinum Eagle coins contain 9995 fine investment grade platinum bullion.

Since around 2000, platinum has become an increasingly popular precious metal to invest in. Though still not as popular as gold or silver, it is also much rarer, and there are far fewer platinum coins available on the market than gold or silver coins.

Platinum's price does not follow the price patterns of gold and silver. It is dependent on labour, social, economic and political factors primarily in South Africa, Zimbabwe and Russia, where almost all of the world's platinum is minted. It is also dependent on demand from the automotive industry. Platinum is used in catalytic conversters of luxury cars, and its price can vary depending on demand for luxury vehicles.

For these reasons, it is prudent to add platinum to a diversified portfolio that includes precious metals.

Platinum American Eagle coins are available for delivery or for VAT-exempt storage in Switzerland. For clients interested in purchasing platinum coins or platinum Eagles in wholesale quantities, SuisseGold.ch offers low-premium platinum coins in tubes of 20 pieces, or in monster boxes. Platinum coins may be purchased in any of 15 currencies.