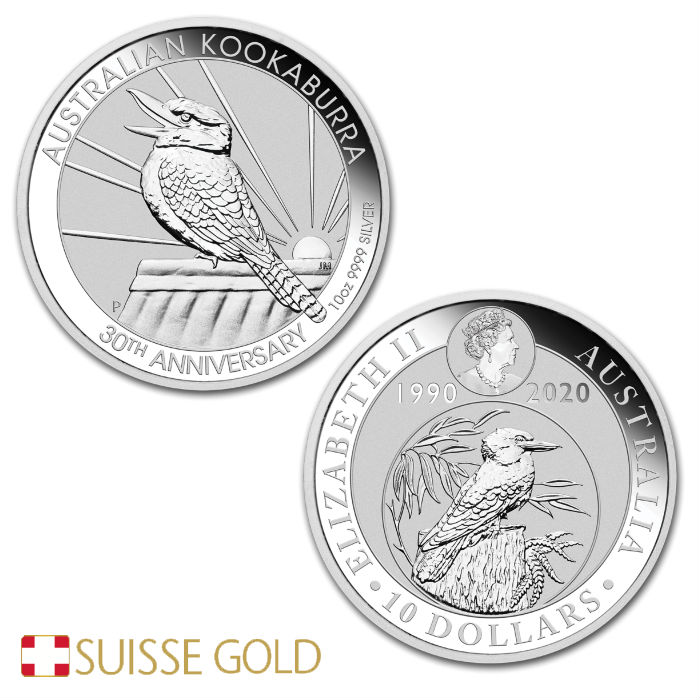 About the 2020 Kookaburra Silver Coin Series

The silver Kookaburra coin has been in production since 1990, and this year's coin marks its 30th anniversary. It was the first numismatic silver coin to be released by the Perth Mint, following several years after the gold nugget coin, which was initially released in 1986.

The coin features an image of Kookaburra on both sides. On the front of the coin the Kookaburra faces East with the sun rising behind him, and on the reverse he faces west with some tree branches in the background. The front of the coin features the words '30th anniversary' at the bottom. Each coin contains 9999 fine silver bullion. The 10 Ounce silver Kookaburra coin is backed by the Australian government and has a legal tender value of $10 AUD.

This series is particularly popular with numismatic investors. One additional popular feature of the Kookaburra coin is that its design is updated annually, to feature a new image of a Kookaburra. Many silver investors like to purchase these coins each year.

The Perth Mint also produce several silver bars. They produce a 10 Ounce and 1 Kilogram silver cast bar, which is also made from 9999 fine silver bullion. More recently, the Perth Mint released a silver Kangaroo bar, which is available in 1 Ounce size only. This bar is manufactured to the same high standard as the Perth Mint's silver coins.

Perth Mint silver is available for delivery or for VAT- exempt storage.

Please contact us if you have silver Kookaburra coins to sell.