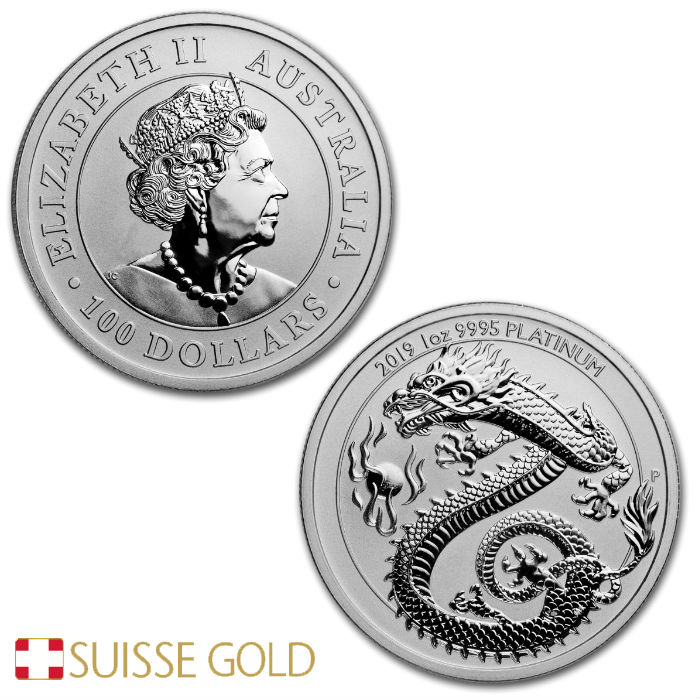 The Perth Mint Dragon coin features an image of Queen Elizabeth II on the front, with the words 'Elizabeth II' and 'Australia' written around the top of the coin. At the bottom of the coin is its face value - $100 AUD.

The reverse of the coin features a snake-like Dragon, with images of fireballs and flames in the background. The coin's year of minting, weight, purity and metal type are located at the top of the coin. These coins contain 9995 investment grade platinum bullion, and weigh one troy ounce. 2019 was the first year of minting for these platinum Dragon coins.

A History of the Platinum Dragon Coin

The Platinum dragon coin was first released in 2019. It was designed in response to the overwhelming popularity of the Lunar Series Dragon coins. The Dragon is by far the most popular design on the Perth Mint Lunar series of coins, followed by the Tiger. The Perth Mint did release a dragon coin in gold and silver, however these have a slightly different design, and are in the shape of a bar, not a coin. However, because they still have a legal tender and each coin has a face value, they are called coins, not bars.

Platinum Coins by the Perth Mint

The Perth Mint releases several other platinum coins, however, several are no longer minted - these include the platinum Platypus and the platinum Koala coins. The platinum Kangaroo is currently the most prominent platinum coin issued by the Perth Mint. The Lunar Series has also been launched in platinum in 2020. The Platypus coin was in circulation until 2017, when it was discontinued and replaced by the Kangaroo coin.

All platinum coins issued by the Perth Mint are available in 1 oz size only.

Perth Mint platinum dragon coins are available for VAT-exempt Swiss storage or for delivery. Clients using our storage service may at any time request their order for delivery or sell it back to SuisseGold.ch at favorable rates.