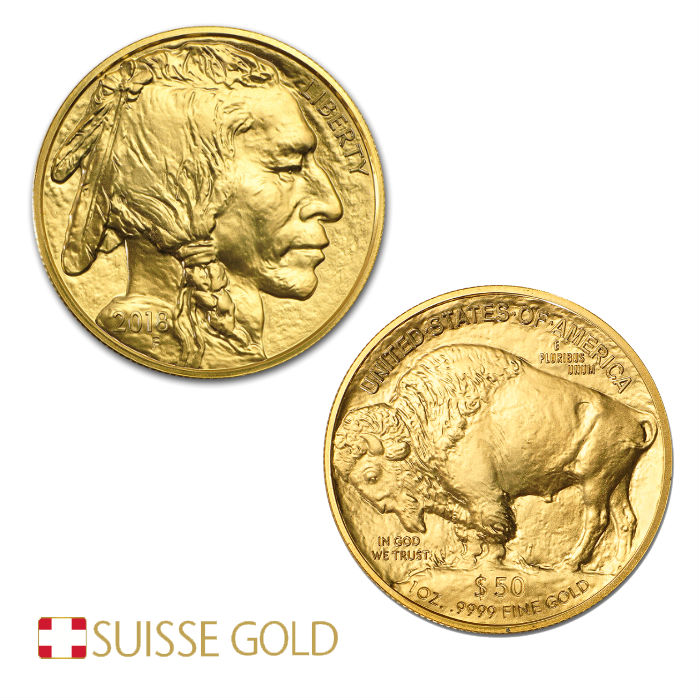 BU mint sealed 1 ounce (oz) gold Buffalo bullion coin, 99.99 fine investment grade 24 karat gold bullion.
Design
The design of the gold Buffalo coin is a replica of the Indian Head nickel or Buffalo nickel, which was produced by the United States Mint from 1913 to 1938.

The American Buffalo gold coin was designed by James Earle Fraser. The front of the coin features the profile of an Indian Chief. The design is actually a composite of three Indian Chiefs from three different tribes.

The reverse of the coin features the image of a buffalo. The Buffalo is believed to be 'Black Diamond', a famous American Bison that lived in the Central Park Zoo in New York City in the 1910s.
The American gold Buffalo coin was first released in 2006, and has been in cirulation ever since. It was the first 24 karat, 9999 fine investment grade gold bullion coin issued by the United States Mint, and still remains the only 24 karat US Minted gold coin available on the market.
About the Gold Buffalo Coin
The American Buffalo gold bullion coin is available in 1/10 Ounce, 1/4 Ounce, 1/2 Ounce and 1 Ounce sizes. However, the coin was initially released in fractional sizes, which were later discontinued. Current issued of the gold Buffalo are only available as a one ounce coin.  The American Buffalo is currently only available from the US Mint in gold bullion. Many private mints issue silver Buffalo rounds, however, these are not official US bullion coin, and do not carry any legal tender value.

Suisse Gold carry the 1 Ounce gold American Buffalo coin in 2019 and backyear versions. Gold Buffalo coins are available individually, in tubes of 20 pieces, and in monster boxes.
The US Mint
The United States Mint issues several popular bullion coins. The first issued and most popular gold Bullion coin available from the US Mint is the American Eagle series. The American Eagle is available in gold, silver and platinum.
The US Mint also used to issue the double Eagle, or St. Gauden gold coin, which is contains 30.5 grams of gold. This coin is not currently issued by the mint, and is only available in backyear versions.

All gold Buffalos are sold in Original Government Mint Sheets. All current year coins are guaranteed to be in BU condition.
Please contact us if you wish to sell your 1 oz gold Buffalos.
View today's spot gold price for 1 ounce gold coins.