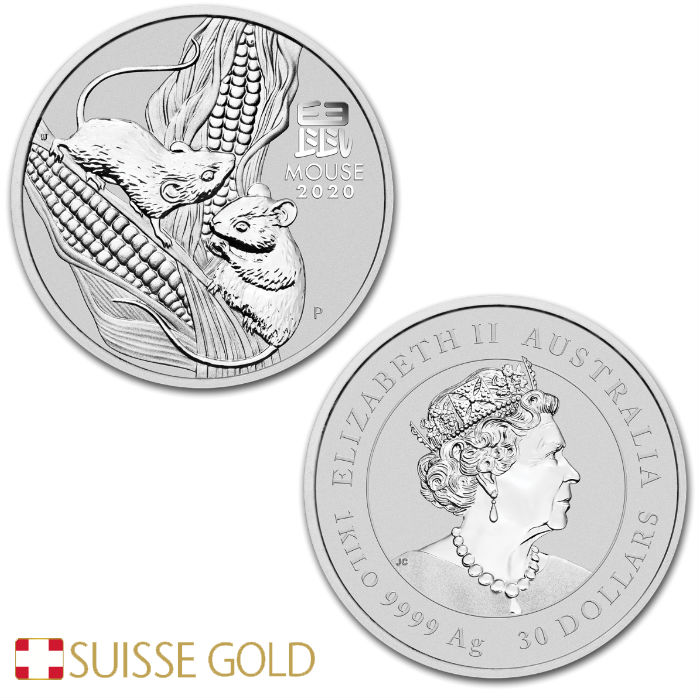 These coins are in new and uncirculated condition, released directly from the Perth Mint.

The Perth Mint was the original Mint to launch a lunar series of bullion coins, first releasing their Series I Lunar coins in 1996, in gold. Since that time many countries have copied this idea, launching their own Lunar series. These include the Royal Mint, the Monnai de Paris, and the governments of Niue and Mongolia. However, the Perth Mint series have remained the most popular and collectable to this date. The coins are available in gold, silver and platinum, and the gold and silver coins are available in a wide range of sizes. Gold Lunar series coins can be purchased from 1/10 oz up to 1 KG sizes, and silver from 1/2 Oz to 1 KG.

Design of the Year of the Rat Silver Coin

The Year of the Rat is the first in the third series (Series III) of Lunar coins to be released by the Perth Mint. The front of each coin features two Rats sitting upon two ears of corn, eating their kernels. The Year of the Rat is symbolic in Chinese culture with abundance, wealth and success, making it one of the most popular Lunar animals. The reverse of each coin features an image of Queen Elizabeth II, with the coin's face value, purity and weight located at the bottom. Each coin contains 9999 fine investment grade silver bullion, and has a face value of $30 AUD. This means that each 1 KG silver Year of the Rat coin is backed by the government of Australia to a value of $30 Australian Dollars.

Silver Bullion By the Perth Mint

The Perth Mint release a number of popular silver bullion coins to investors worldwide. Both the silver Koala and Kookaburra coins, which are available in sizes ranging from 1 Ounce to 1 Kilogram, are popular with investors who prefer to purchase silver coins instead of silver bars in larger increments. In 2017 the Perth Mint released their silver Kangaroo coin, in 1 Oz size only, in response to the popularity of the Kangaroo coin in gold. The silver Kangaroo is also available in mini-monster boxes of 250 coins. The Perth Mint also release a Swan coin, which is also available in gold and in silver. The Koala, Kookaburra and Lunar series silver coins all depict a new image each year, making them a popular option with investors and collectors alike.

1 KG Silver Lunar Coins are available for VAT-exempt Swiss storage or for delivery. Price includes free vault storage for one year from the date of purchase.