Why is Gold Valued More in Some Parts of the World Over Others?

Gold, the time-tested store of value through the ages, is really an odd commodity.  The metal can be used in processors, computers, medicine, and dentistry.  Gold is also employed in aerospace, sports medals, and awards.  The yellow precious metal is also beloved by women as jewelry.  Additionally, the financial world is perhaps the most well-acquainted with the highly valued precious metal.

The many uses of gold, though, does address the question here, which is why gold is “loved” so much more in some parts of the world compared to others.

The following figure acts as the backdrop for the question.  The graphic shows the holdings of gold by country per Gross Domestic Product (GDP) of a country.

Incredibly, the country with the largest amount of love for gold is Uzbekistan.  The central Asian country has gold holdings as a percentage of their GDP of almost 90 percent of GDP.  Fascinating.

In second place, and not far behind, is Lebanon.  Lebanon’s holdings of gold equate to almost 85 percent of GDP.  The list of countries according to their holdings of gold relative to their GDP takes a sharp drop after these two countries. 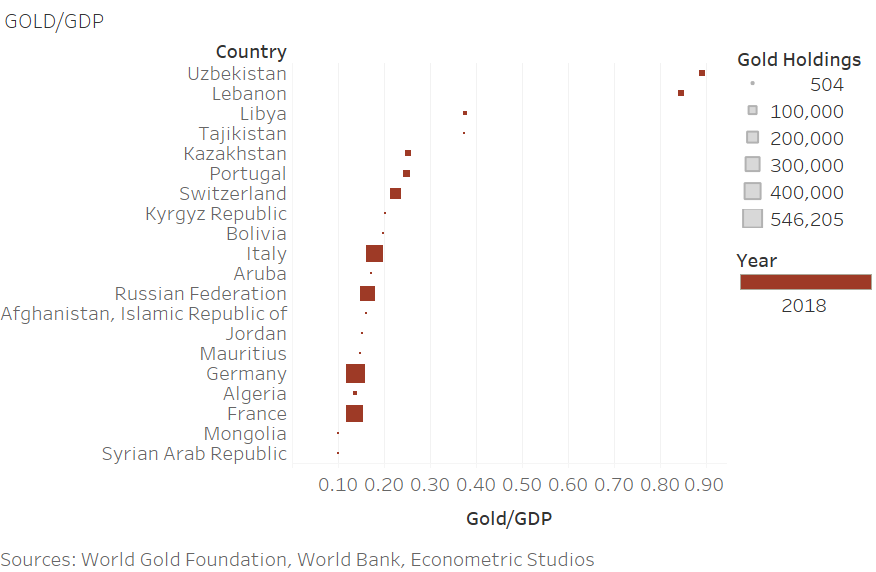 Third and fourth place belong to Libya and Tajikistan.  These two countries have gold holdings per GDP of around 37 percent each.  The last member of the top five is Kazakhstan at around 25 percent.

Interestingly, no western world country shows up in the top five.  The first country in the so-called western world to show up on the list is Portugal, with around a quarter of its GDP in gold holdings.  To watchers of government budgets, this finding is completely unsurprising.  When one’s finances are in such bad shape as they are in

Portugal, it’s a good thing to gold as much gold as they do.

Perhaps just as interesting is the country that follows Portugal – Switzerland. The Swiss have a much stronger government balance sheet but hold just about as much gold as a percentage of their GDP as Portugal.  Historical cultural reasons probably explain part of this difference.

What are the Reasons?

What are the reasons as to why some countries hold so much gold relative to other countries?

Second, some countries may have political aspirations with their gold holdings.  A very popular speculation as to why Russia has been accumulating large amounts of gold is that it would like to create a gold-backed cryptocurrency that potentially replaces the US dollar as the world’s reserve currency.  Russia has nowhere near the amount of gold it would need to make such aspirations real, but it may be working towards such a goal.

Other countries, such as China, may share similar end-goals..

Third, culture explains part of the divergence.  Countries that have had bouts with hyperinflation or are around countries with a history of war, may gold a larger gold stock than others.  Think Germany or Switzerland.

Conclusion
Gold, the time-proven commodity for a store of financial value, is held in very different quantities across the world.  Acting as a support for a currency or to backup government spending likely explains some of this.  Other reasons may be based on political ambition or historical cultural reasons.  In this discussion, one thing is crystal clear – gold is still store of value that it has always been, and there is no evidence of this going away anytime soon.