Who Doesn't Love a Currency War?

One of the most interesting topics in the field of economics, or of the global markets in general, is the topic of currency wars.  At their core, currency wars are really just wars without guns, although they sometimes come with worse consequences than actual war.

Why does the topic of currency wars matter?  The discussion is relevant today because of recent comments out of China, Europe, the United States, and other global powers.  In looking at the Google Trend search report for “currency war”, the month of August is already at an index value of 52, and the month is only a little over half over.  Obviously, the topic is on people’s minds.

Since 2010, according to Google Trends, only two other months have had higher search volume for currency wars.  These two months are October 2010 and February 2013.

In October 2010, the main players were the U.S. and China.  An out-of-character comment from Brazilian Finance Minister Guido Mantega made headlines back then when he argued that a currency war may be upon the world.  Although concerning, a currency war failed to materialize, and concerns about a currency war fizzled out by mid-2011.

Three years later, in 2013, the players were the European Union and Japan.  Behind the heightened interest was policy measures announced by policymakers out of Japan that could have the effect of devaluing their currency.  Fortunately, the issue was addressed head on, and by the end of February 2013, the G7 and G20 had issued statements committing to avoid competitive devaluation. 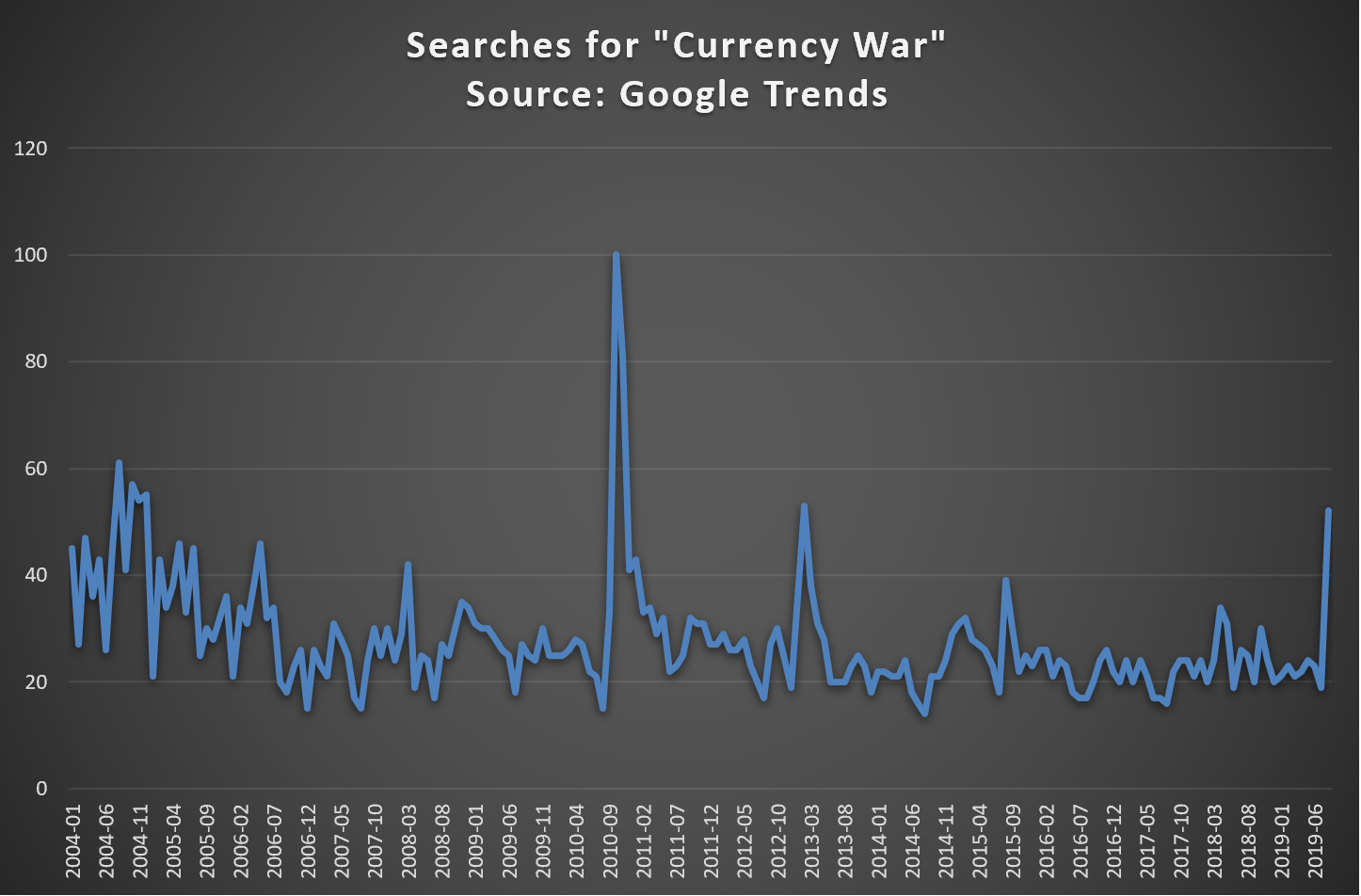 Currency Wars and Their Effects
Shifting attention to August 2019, and the currency war topic is back in fashion.  The issue today is how an actual, competitive currency devaluation would play out between the European Union, China, Japan, and the United States.  The simple answer, unsurprisingly, is that a currency war between the world’s largest powers could trigger a deep global recession.

Although the effects of currency wars show up in many different ways, there are, in general, two main effects.  The first effect is that currency wars lead to a change in purchasing power.  Consumers living within certain countries feel as though their standard of living has declined.  Richard Cooper, writing all the way back in 1971, said: “a substantial devaluation is one of the most traumatic policies a government can adopt – it almost always resulted in cries of outrage and calls for the government to be replaced.”

Conclusion
The world may just be entering a new era of economic warfare, this time around called a currency war.  Although seemingly impossible to foresee how a currency war will turn out, there is one thing everyone can count on in the event of a currency war – currency wars will produce winners and losers.  And, the effects on the winning and losing countries may last for years to come.  May the strongest currency win.