The Problem with Global Debt

The global economy is in a fascinating place.  On the one hand, GDP growth rates around the global have been coming down in most of the world’s advanced economies for the past year.  This deceleration has spurred responses from central banks.  Central banks are now in another loosing cycle (if they ever really got out of the loosening cycle).  Interest rates around the world are coming down, with no sign in sight that interest rates will ever escape their historically-low levels they find themselves in right now.  Lower interest rates is not the only thing central banks are doing.  Central bankers have also indicated that they plan to print more money (known as quantitative easing in economist-speak).  In 2020, central banks in the U.S. and the E.U. may print another €1 trillion in new money.  Simply amazing.  Interestingly, although central bankers are acting as if the global economy needs all hands-on deck, consumers around the globe are in good shape.  Not only are consumers’ spending habits in great shape, equity markets are doing well.  It is truly an amazing time to be an observer of the global economy.

The condition of the global economy puts the current discussion in context – government debt.  By most measures, government debt is still exploding around the world, approaching levels of implosion.  The explosive growth towards an implosion comes, interestingly, at a time when some influential global financiers are suggesting more debt is needed to finance more government spending.   For instance, new European Central Bank President Christine Lagarde is calling for new rounds in government spending to lower the risk of a recession materializing in the near term.  In debt terms, this push – perhaps unwise – means that governments will need to print more money.  That is, unless government decide to raise taxes, something very few are suggesting.

Ms. Lagarde’s comments are not uncommon across Europe and other countries.  The much less popular comment, although more prudent, is for governments to begin lowering their spending to improve their overall balance sheets.

This push for more spending, lower interest rates, and more money printing leads to the obvious conclusion – When it comes time to deal with all this debt, how will it be solved?  The answer is, unsurprisingly, uncertain.  Will spending be curtailed?  Will more money be printed?  Will low interest rates be the norm?  Perhaps creative solutions will come about, such as printing multiple €1 trillion coins to pay off debt?  Will taxes go up?

No one knows the answer to these questions.  What seems more visible is that the solution providers will be much thanked with their solutions.  A Nobel Prize may be awaiting the professionals providing the solutions.

Looking Visually at the Issue

The background has been established.  The evidence follows.  The following graphics show government debt as a percentage of GDP (gross domestic product).  Simply amazing.  Debt, debt, debt, and more debt.  There is nothing in sight suggesting any interest in addressing the debt issue. 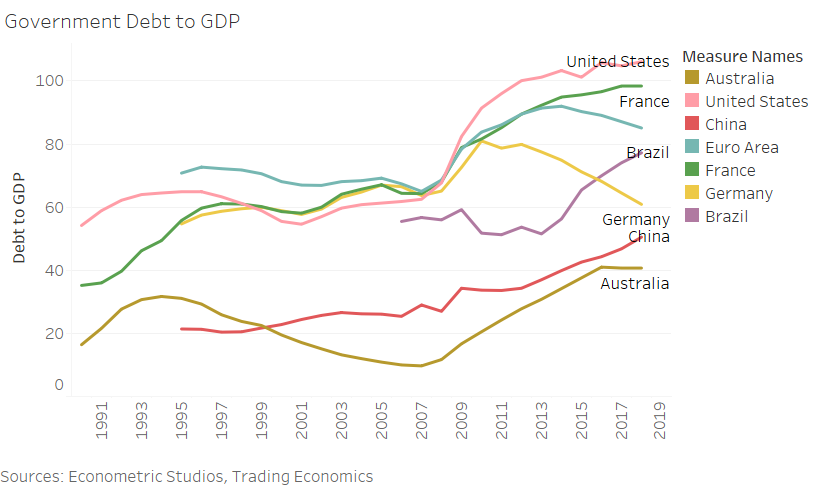 Perhaps the most significant financial problem of the 21st century will turn out to be debt, including government debt.  For creative problem solvers, the problem is a huge opportunity to put one’s mark on the world.  Finding a solution to the world’s massive debt problems may even end up getting the solver(s) the Nobel Prize.  Gold or some other precious metal may turn out to be part of the solution.