It is 1974. The world is in the middle of a global oil crisis. Western nations - Europe and the U.S. - are attempting to solve the oil crisis, a crisis that could threaten their economic future for years to come.

In the U.S., President Nixon concocted a plan to ensure America’s oil future by offering Saudi Arabia’s ruling family a deal that they could not ignore. The U.S. government would provide the Saudis with military equipment and supplies in exchange for the Saudis providing the U.S. with a consistent supply of oil. The Saudis would invest their oil earnings in U.S. Treasuries, a move that would finance American deficits for years. Amazingly, the Saudis accepted the American proposal. This was the modern day birth of the petrodollar. The petrodollar now dominates the pricing of oil. The Americans are willing to defend the pricing of oil in dollars at seemingly all costs.

Here is the price of oil overlayed with the price of gold. Both are denominated in euros. Notice anything? The two are closely matched. The correlation comes out to 11.7 for a simple linear regression, meaning that, on average, when oil rises $11.70, the price of gold rises $1. 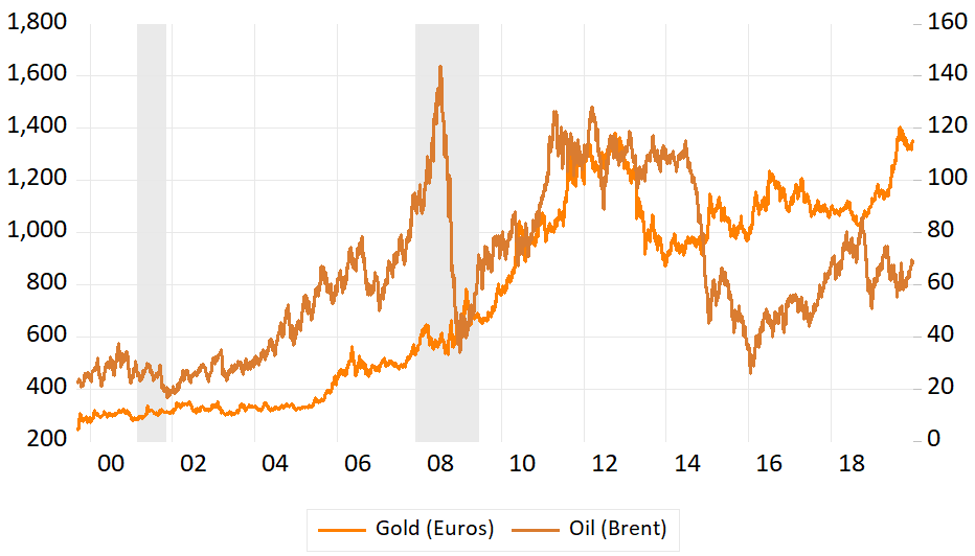 With MIddle Eastern affairs affecting the price of gold, what events are on the horizon that may impact gold? Iran, for one, and its relationship with the U.S. The build-up of American troops in Iraq and the broader Middle East. Saudia Arabia’s dealings with their neighbors. Any of of these issues, as well as a host of others, could blow up in 2020 and cause a prolonged spike in the petrodollar and the price of gold.

Overall, the price of gold and the price of oil are intricately connected. With heightened global tensions, one should probably expect the fear-hedge aspect of gold to have a greater influence on its price than the physical demand for consumption/industrial uses aspect of the price of gold.