2018 saw global stock markets reach all-time highs, then only to give up a chuck of wealth to end the year.  We saw the beginnings of a trade war between the U.S. and China.  Brexit garnered a fair bit of attention, with numerous speculations on what a final Brexit my look like.  We saw a spectacular display of athletic prowess in PyeongChang.  Global financial markets digested an intriguing divergence in central bank policy between the U.S. and Europe.  Through it all, the global economy probably expanded by around 4%.  Healthy, very healthy.

Captivatingly, although global growth came in around 4%, global equities were routed to end the year.  As measured by the ACWI Global Stock Market Index (which is basically an accumulation of a bunch of stocks across the globe), global equities gave up 9.1% in 2018.  In money terms, that 9.1% means that around $20 trillion in wealth was wiped out in the last quarter of 2018.  Not pretty, not pretty at all.

On the bright side, gold, the world’s oldest store of value, gained 3.5% (as measured by the AM Euro measure).  If you owned gold throughout 2018, you likely had a slight smirk on your face to end the year. 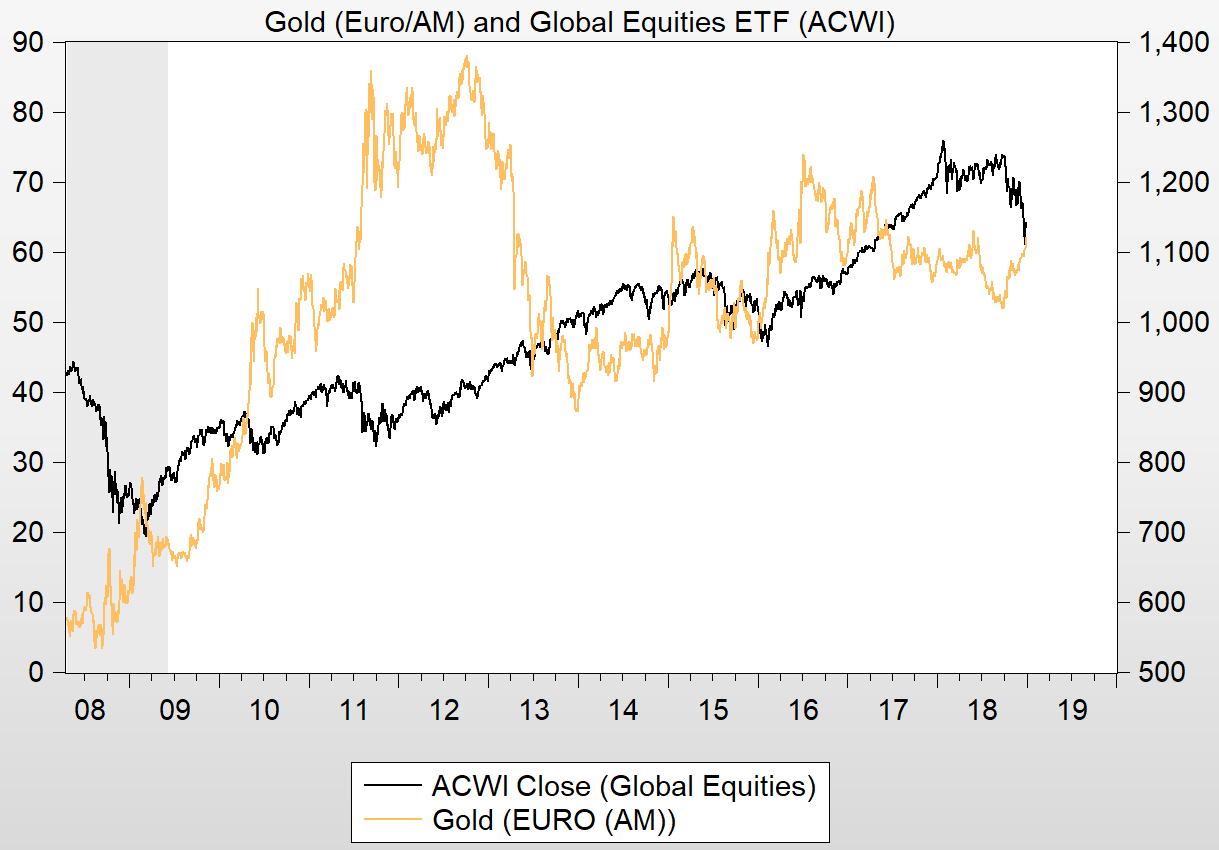 The divergence between equities and gold to end 2018 poses an interesting question – Do global equity markets paint a pretty picture for gold in 2019?

The answer is probably yes.  The scatterplot that follows is the historical connection between global equities and the price of gold.  Generally, when equities are performing well – and thus when the global economy is doing well – gold typically goes up.  Demand for the precious metal likely plays a role here.

Now, shift to just 2018 (depicted on the following page). 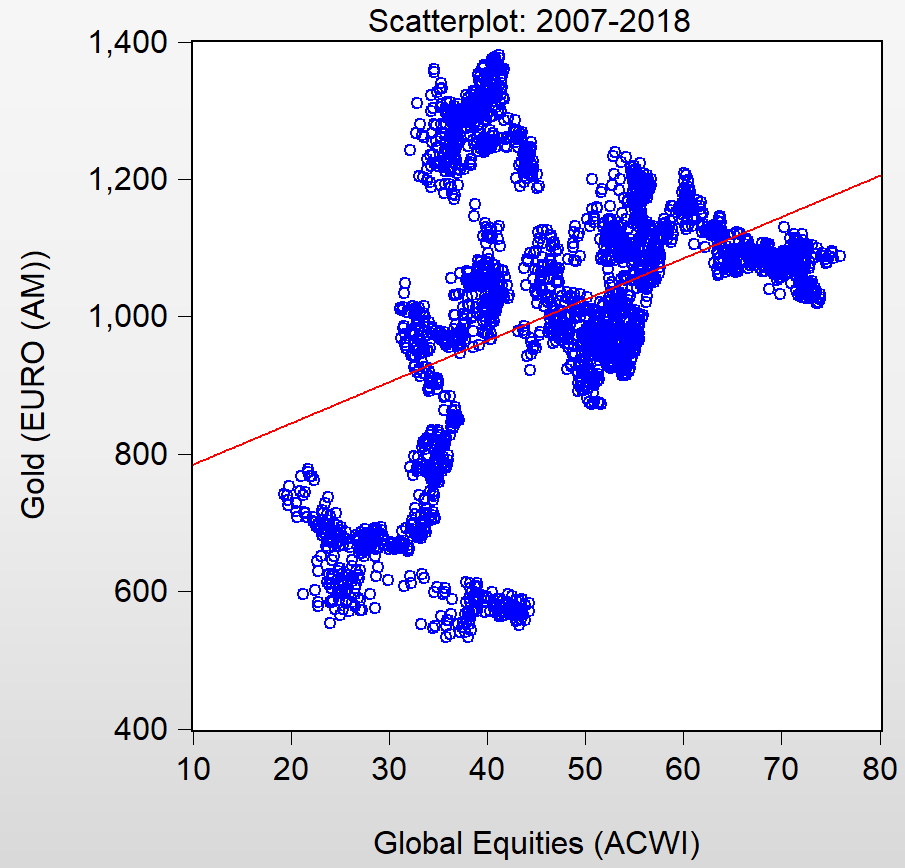 Why does this paint a pretty picture for gold in 2019?  Two reasons.

First, should the global economy gain steam in 2019, gold will likely follow suit.  Demand will increase, and with the speculative value of gold mostly gone from the current price, the value of gold should rise.

Overall, 2019 is likely a Goldilocks time to hold gold.  Not too hot, not too cold conditions for gold. 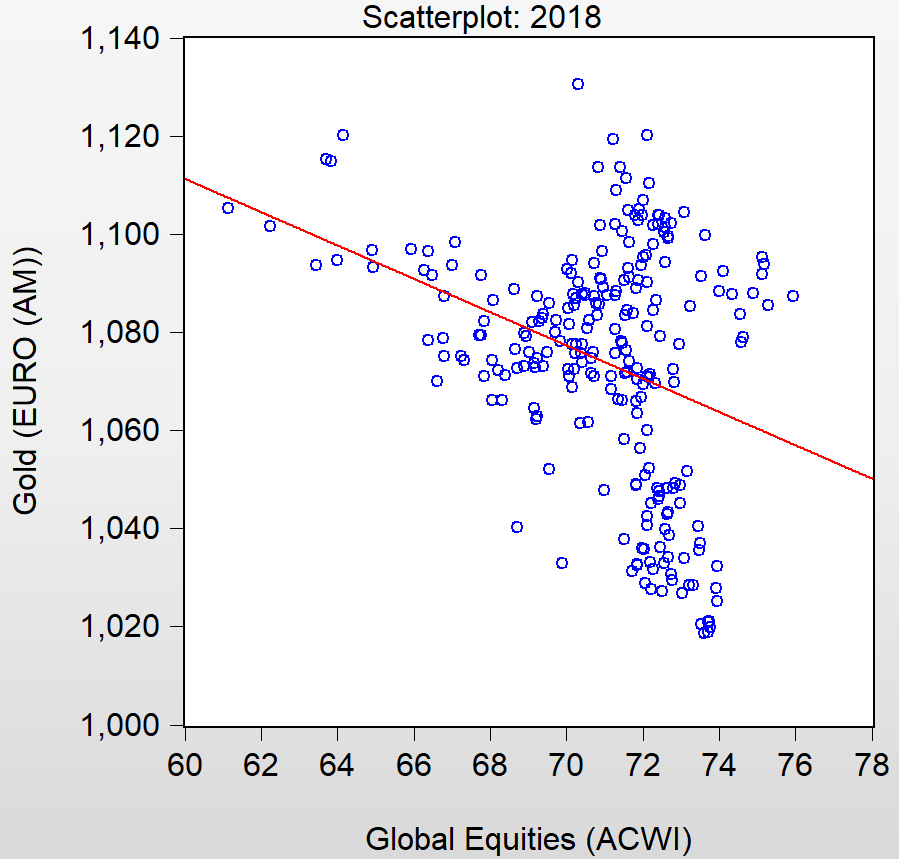