The ECB Will Print More Money

The year has been nothing short of awesome for owners of gold.  The yellowish precious metal started the year at €1,117.  As of writing, the London PM price of gold was up to €1,358, a gain of 22 percent through the year so far.  Quite healthy – a return most any precious metal owner would accept each year.

The last quarter of the year is soon on tap.  What could cause the price gold to move even higher for the remainder of the year?  The European Central Bank (ECB).  The printing presses are back on.  Let’s look. 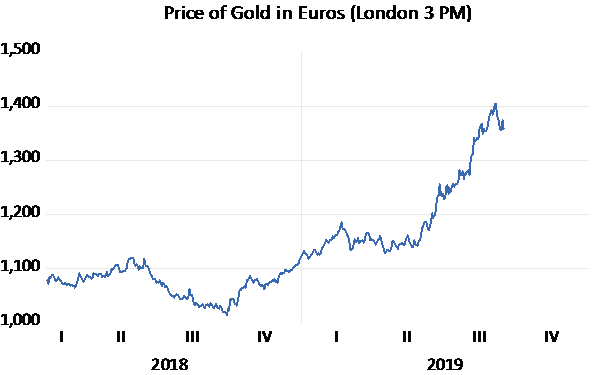 The European Central Bank
This past week, “Dovish” Draghi (Mario Draghi, head of the ECB) announced that the ECB would take additional policy measures to address weakness in the European economy.  The ECB is lowering the deposit rate into further negative territory, from -0.4 percent to -0.5 percent.  Additionally, the ECB will purchase an additional €20 billion euros of assets every month to boost growth and inflation.

What does the ECB buying more bonds with money created out of thin air have to do with the price of gold?  Simply put – it means euros will probably become less valuable relative to gold.  Let’s look at the relationship.

The Price of Gold and the ECB Money Printing Operations
The next graphic has the price of gold (orange, right axis) and the assets of the ECB (blue, left axis).  See a connection?  It is not hard to see one.

Fast forward to 2014.  It is easy to see that the effect of the massive printing operations from 2014 to 2017 were more muted in their effect on the price of gold.  That appears to be changing with the current announcement.  The price of gold has responded positively to Mr. Draghi’s moves.  His suggestions that the quantitative easing steps are indefinite are dressing on top of an already positive move for owners of gold. 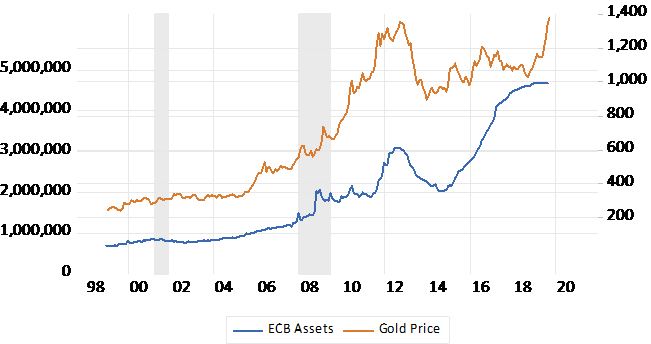 Conclusion
Overall, with the European Central Bank revving up the money printing operations again, owners of gold are likely to be big winners.  The additional €20 billion in money printing will no doubt upward pressure on the price of gold.  Owners can thank Mr. Draghi for the early Christmas present.