Is a New Era of Central Bank Foolery Upon Us?

In the past decade, central banks have figured out that they can print money and expand their balance sheets without paying the price of higher inflation. Very strange.

This age of massive money printing took a breather in 2019, with little substantive change – yet – in new money printing operations.  But, given recent announcements out of the European Central Bank and the Federal Reserve, that will change in 2020.

The change that starts with the last quarter of 2019 and leads into 2020, presents an intriguing question.  How much money will central banks print out of thin air in 2020 in order to increase their balance sheets?

Could the amount surpass €1 trillion?  Could it reach €5 trillion?  Take a guess because this author’s guess follows shortly.

Looking at Nine of the World’s Largest Central Banks’ Balance Sheets
Let us look at what central banks did with their balance sheets in 2019, before speculating on what they may do in 2020.

The following chart has the balance sheets of nine of the world’s largest central banks.  Notice anything peculiar?

Guess how much central banks expanded their balance sheets by in 2019 (so far through the first half of September).

Is that surprising?  Well, it probably should be.  But, the short excursion into prudent money policy is ending. 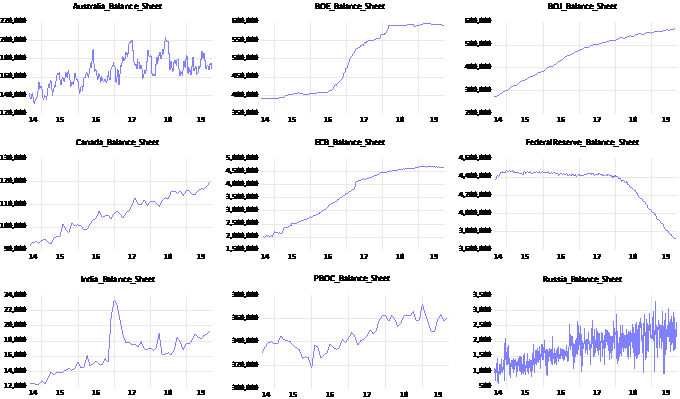 Looking at 2020
Looking forward to 2020, the printing presses are back on.  The U.S. Federal Reserve has committed to expanding its balance sheet again.  The European Central Bank and the Bank of Japan are also committed to more thin-air money.

Overall, financial forecasting firm Econometric Studios, LLC expects central banks to expand their balance sheets by another €800 billion in 2020.  Most of that expansion is expected to come from the European Central Bank and the Federal Reserve.

Conclusion
In attempting to guess at how much money central banks may print in 2020, Econometric Studios came up with perhaps €800 billion in new money printing (balance sheet expansion).  Will this cause a jolt up in inflation?  Perhaps, but one thing is for sure in all this – when central banks want to, they can print more money than the world has ever seen.