Does Gold or Silver Do Better in a Recession

Perhaps the most heated issue among market observers is whether the world will enter a recession in the near term.  Among the indicators some market observers point to are an inverted yield curve, weaker railcar loadings, slower bank lending, and slower trade.  The leads to the conclusion that a recession may happen, and then again, it may not.  The question here is more basic than recession forecasting.  The question is: if a recession does come about soon, which precious metal may be the best to hold - silver or gold?

The Price of Gold and Silver from 2000 to Today

Before looking at how the prices of silver and gold did during the past two recessions, the following figure is a look at the performance of the two precious metals from 2000 to today.  In the chart, the left vertical axis corresponds to the price of gold (orange line).  The right vertical axis is the price of silver.  If takes a step back, one must be somewhat in awe at what the price of gold has done so far in the 21st century. 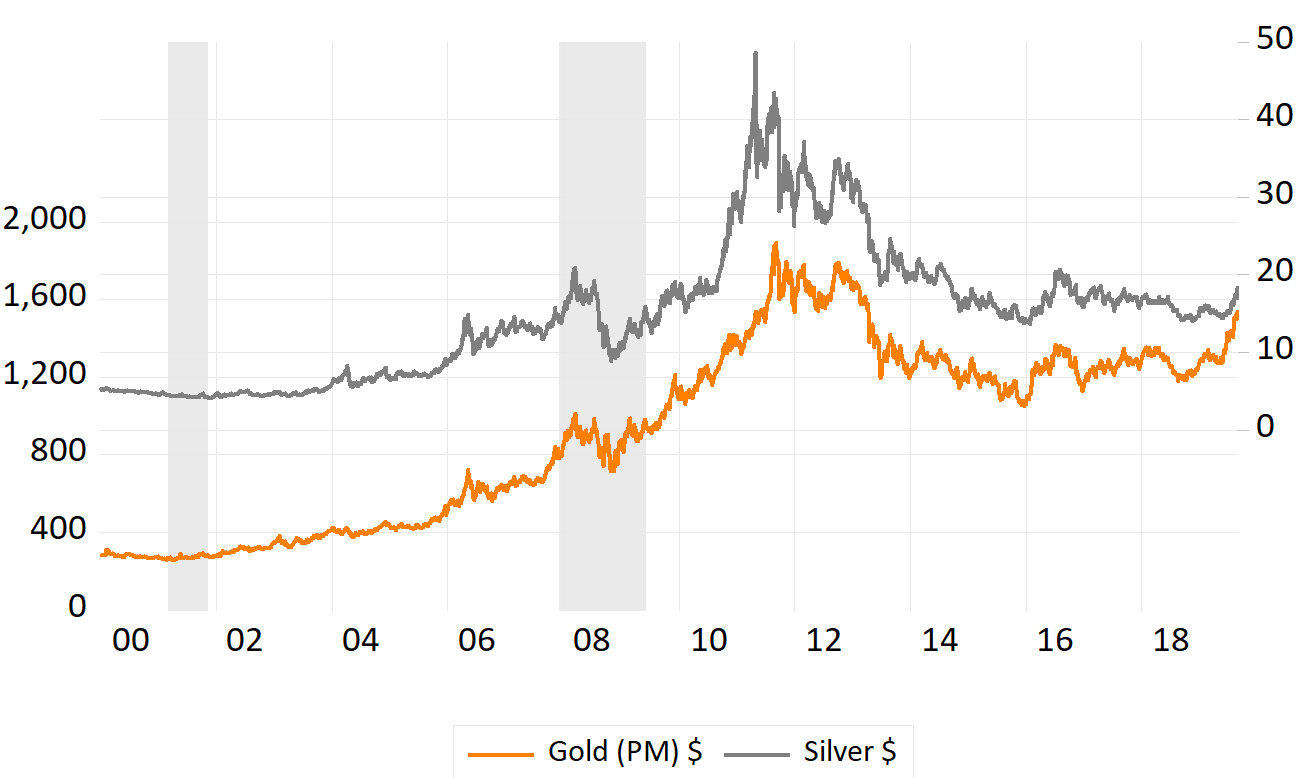 With the topic now introduced, this and the next section looks at the prices of silver and gold during the past two recessions.

Silver’s price started the recession in March 2001 at $4.51.  Seven months later, silver was trading at $4.28 to end October.  The loss was approximately 5%.  For a recession that saw massive amounts of wealth disappear, the 5% drop was not too bad. 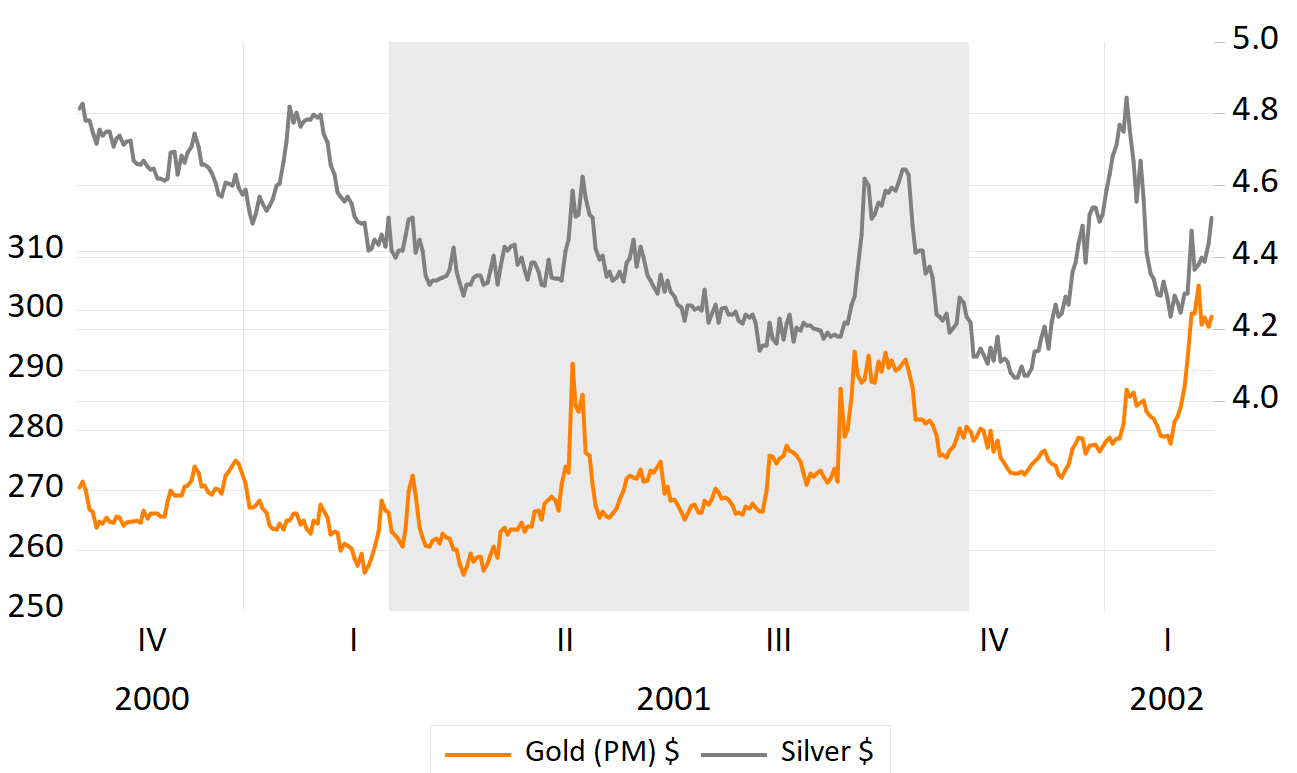 In contrast to the price of gold, the price of silver saw its value decline precipitously.  On January 2, 2008 to year end 2008, silver dropped from $14.93 to $10.79.  The drop was 28%.  Holders of gold had something to hold over the heads of individuals that held silver during the recession. 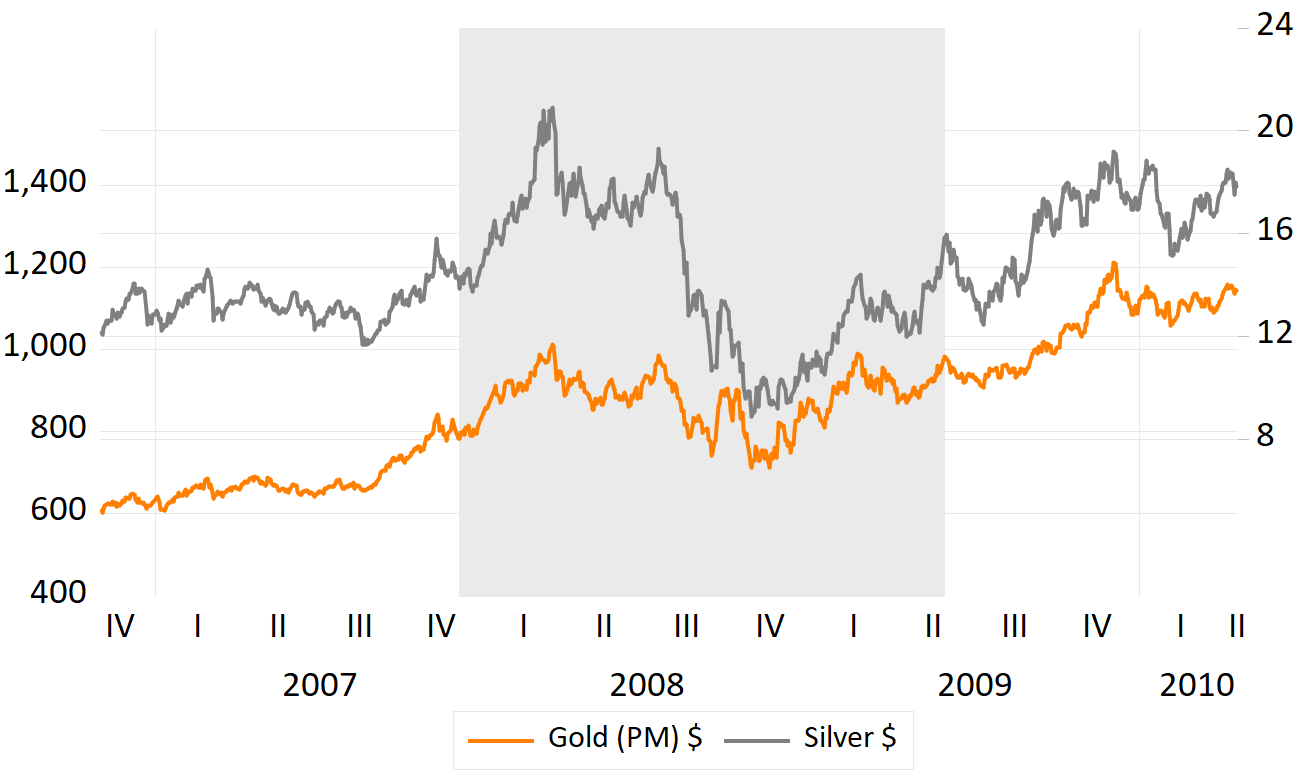 Conclusion
In conclusion, should a recession happen (a very big if!) and if gold and silver prices performance as they did during the 2001 or 2008 recessions, then the asset to hold is gold.   Gold won in 2001, with a return of 5% versus a loss of 5% for silver.  Gold won again in 2008, with a 3% return compared to silver’s 28% drop.  Silver may have a stronger longer-term outlook but think carefully about whether a recession is on the near-term horizon.  It could make a large difference in one’s portfolio value